Huh? What’s Talas? Well, Talas is the smallest oblast in Kyrgyzstan, in the Northwest corner of the misshapen country, and the part of the nation where there are two rules: Don’t hit the livestock with your car, and Manas is King. Lets back up, because travel to Talas Kyrgyzstan isn’t on most trip itineraries! 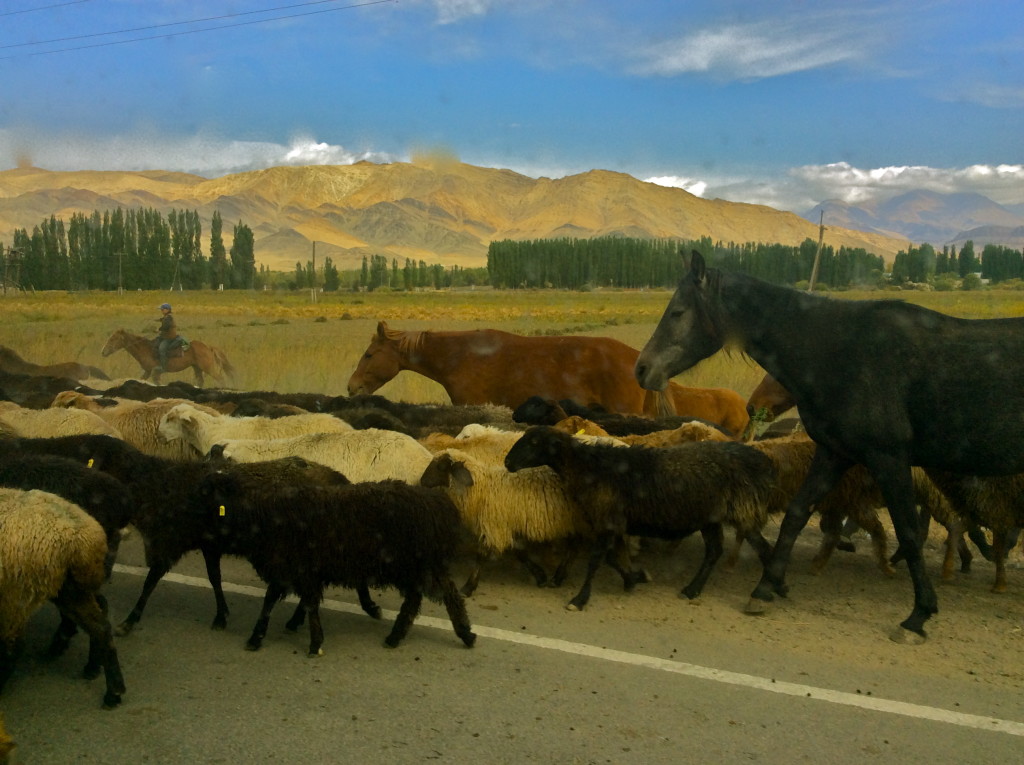 So I left Toktogul, in Jalal Abad oblast early in the morning, as I wasn’t totally sure how my transport to Talas was going to work. From Toktogul, there are no marshrutkas heading north.  To either Bishkek or Talas. I know, it makes no sense and goes entirely against what I say about [intlink id=”1033″ type=”post”]Transport in Kyrgyzstan[/intlink] getting you anywhere. So you have to take a 7 passenger share taxi, and the taxis leave when they fill up. To get to Talas City from Toktogul is about a 3 hour trip, so really not long by Kyrgyzstan standards. The loophole, is that there are only 3 guys who do the Toktogul to Talas route. And when I was calling them asking if I could get a ride, all three of them were currently in Talas. Not helpful guys. One person told me to take a taxi to Bishkek and then taxi to Talas. Making my 3 hour trip more like 9 hours. Thanks but no thanks.

Enter Brainstorming 101. This is what I did: I got on a shared taxi headed for Bishkek. Paid the full fare (you just have to eat your losses sometimes). Got off the taxi at the turn off to Talas, which is marked by a massive double archway, a huge Kyrgyz flag, and a monster statue of Manas, the nation’s hero, on horseback. When I got off here, I then stood on the road to Talas and hoped that a well meaning citizen would pick me up (Note: this is not called hitch hiking, it’s called ‘flagging a ride’. They do it all the time in Talas!). In the mean time I stood with a family of about 12, who were rest stopping, eating chicken and drinking vodka. They offered me some of both, but it was about 9:30 in the morning and cultural integration can only go so far at that time, while standing in the rain beside a mountain road. They were all still very impressed I could say where I was from in Kyrgyz though!

The family took off on their merry way, with no spare room for this girl, but in about 10 minutes a car pulled over with two old guys and three young dudes, all coming back from jailoo, the summer pastures where the livestock goes for the grazing season. One of the jegeets, aka young dudes, hopped in the trunk, I hopped in the back seat, and off we went!

We drove through the mountain pass, which sits at about 3,300metres, and twisted and turned our way down to the first village. During the journey, we stopped on the side of the road, everybody got out, and we all took pictures of a cow skeleton that was imbedded into the side of the road embankment. How did it get there?!?! And how many times has this group of people stopped to see this dead animal. I also took a picture of my hosts, as you can see below. The youngest of the jegeets asked me how old I was, and then promptly told me the ages of his compadres, noting that they were both single. Great, I need a Talasian man like I need bout of giardia.

Once we got to the first village, this group of dudes were going separate ways, but the driver baike helped me get into another taxi headed for Talas City, so that transition was seamless. What flavours road travel in Talas, at this particular time of year, is the aforementioned live stock. Sheep, cows, horses, goats, and donkeys do not get trucked home after grazing at summer pastures, they get to trot it out. On the road. Meaning about every 10-15 minutes the car you are in has to get itself through a sea of assorted livestock, some animals more intelligent than others. Apparently there is a massive penalty for hitting one of these precious animals with your car, though I can’t imagine it not happening fairly regularly. There are literally sheep everywhere!!! And the horses, while absolutely gorgeous, don’t have any respect for your time or driving space either!

Anyways, once getting into Talas City, I met up with some of the volunteers, had pizza and beer for lunch, and then Tori, Skip and I headed for the River, or as Skip calls it “his little slice of Talas Heaven”. And it is pretty heavenly. That night I went out to Tori’s village, which is about 35 minutes out of Talas City, had a tour around her home, and settled in for a night of girl talk and Prison Break watching. And then her Apa came to the bedroom door and made everything better, handing us a bottle of Made in Kyrgyzstan, red wine. It had a black panther on the label and tasted like alcoholic juice. We loved it. Thanks Tori’s Apa!!! 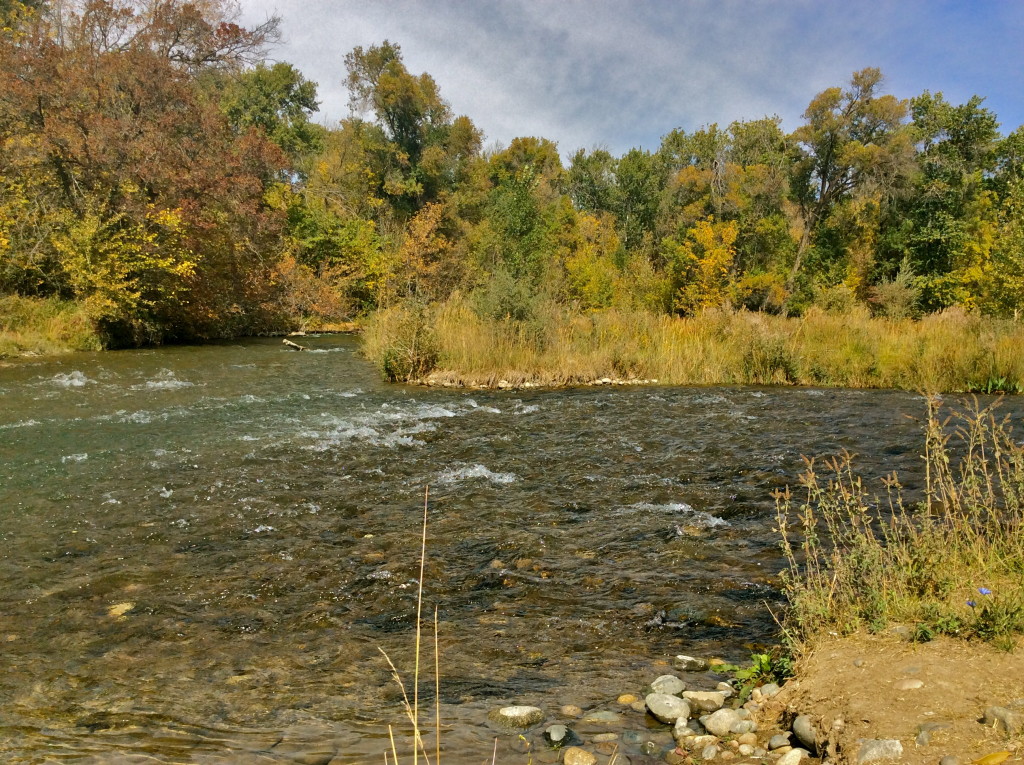 The next morning, after eating breakfast with Tori’s wonderful and thoughtful Apa, we headed back into Talas City and met a crew of volunteers to go hiking in Besh Tash National Park. Besh Tash means 5 Rocks, though there were many more than that, so I’m not sure where those specific 5 are. We taxied out to the park, and then well into the park. Then we walked for about 2 hours, when we all basically had enough and sat by the river for a while. We also climbed up to a mountain meadow area, where frolicking occurred, as did a rendition of The Hills Are Alive. The scenery out in this park is gorgeous, surrounded by mountains, and you’re definitely in jailoo country there too. We passed a few herds along the road, while on foot, and oddly unlike when you are in a car, they get out of your way very willingly. It was basically like the parting of the Red Sea, but with sheep. There is also always at least one random goat in amongst the herd of sheep. I don’t know. Just accept it. 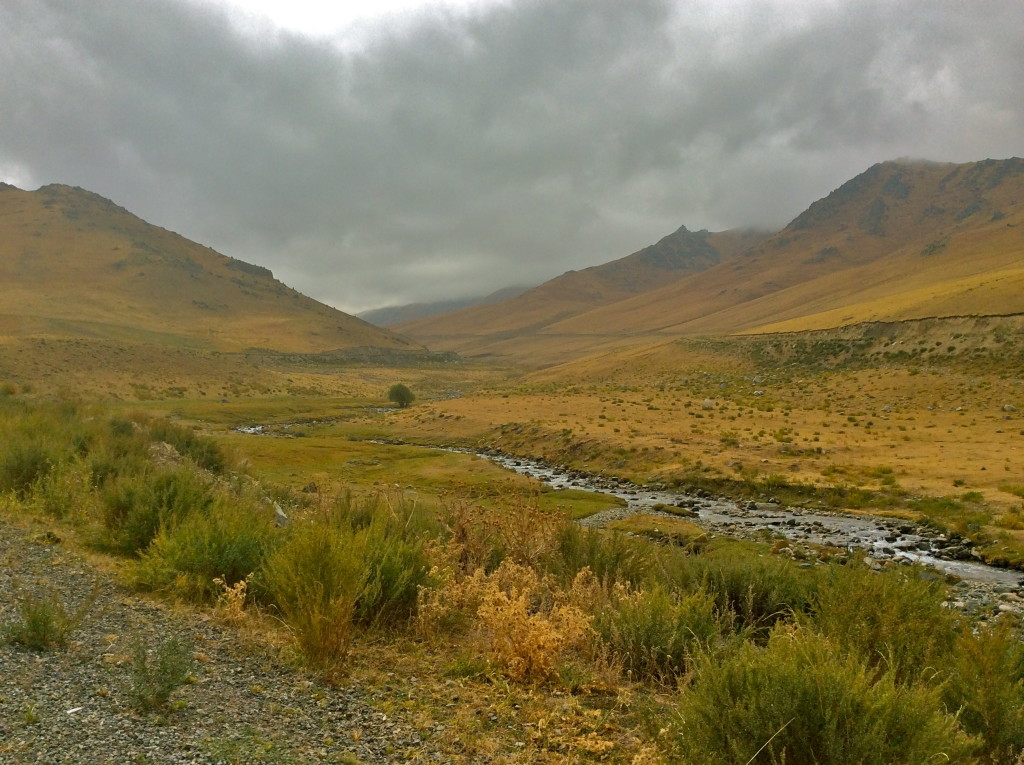 After Besh Tash, we headed back to town for dinner at the newly opened Chinese restaurant. This is a big deal in Talas City, where volunteers have not had great options for diverse food, or destinations for said food. And the food at the Chinese restaurant is really good! Except, well, “no, we don’t have rice.” To which the group of 8 volunteers who had ordered 8 servings of rice collectively said “Reez jok?!?!?!” Aka, Huh? No RICE?!?! Sometimes things manage to baffle you, you just can’t contain your bewilderment. A Chinese restaurant with no boiled rice. Ok. The sweet and sour chicken was still damn tasty.

Besides landscapes and sheep, Talas offered this traveller one other event for the ages: the very first Talas Ladies Night. I was allowed to attend, I’m sure soms were slipped under the proverbial table to allow me the privilege. Talas, in the Peace Corps, has been named the Bro-blast, but with my class of volunteers, the female numbers in Talas have swollen to an amount that truly calls for a Ladies Night. And lets just say the 2nd Annual Talas Ladies Night has a high standard to live up to. And yes, there was red wine. 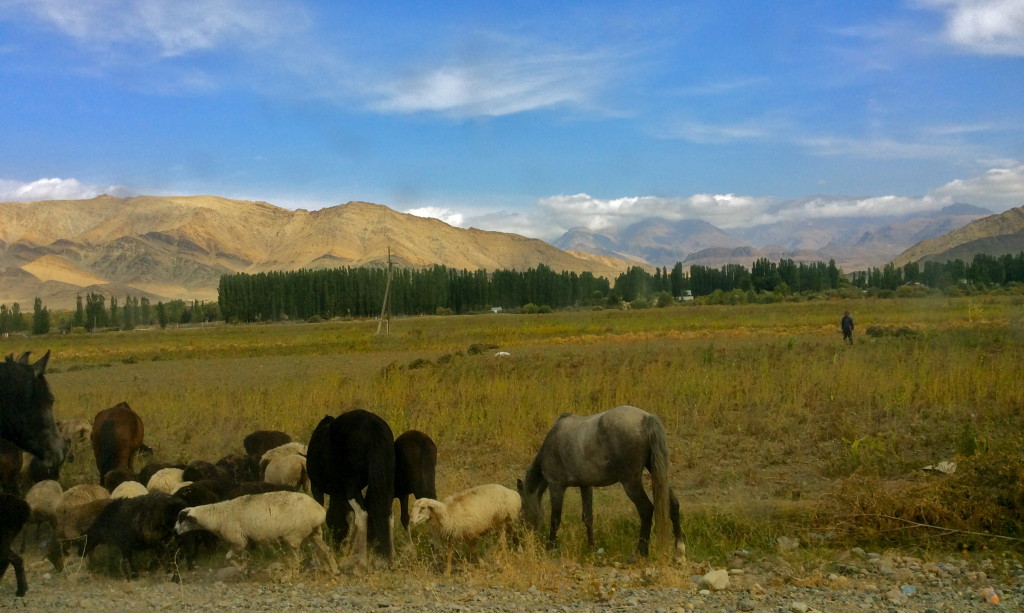 My last day in town was merely an extension of Ladies Night, as it was still just all the girls, eating and gabbing all day. I had another Reez Jok experience when the cafe we went to for breakfast didn’t have water. Plain old, non carbonated water. “Syy Jok”. Breathe Emily. I went next door to the store and bought myself some water. And a Coke.

The next morning, I taxied out of Talas the way I had entered, in a share taxi through the Manas arches, but this time turned left, in the direction of Bishkek. At one point, you technically leave Talas and are in the Chui oblast, but you are still in the mountains and have a pretty impressive mountain pass in the form of an epically long tunnel ahead of you. The views are gorgeous on this road, and you’re still definitively in jailoo country. There are yurts that are still up from the summer season, selling chai, kumuz, and those chalky kumuz balls. You still see some herds, but not as many as would have been there 3 weeks earlier, and the sweeping landscape shows that fall is coming. Your ears pop from the descent, and you no longer have to fight for road space with sheep. But hey, that’s Talas! 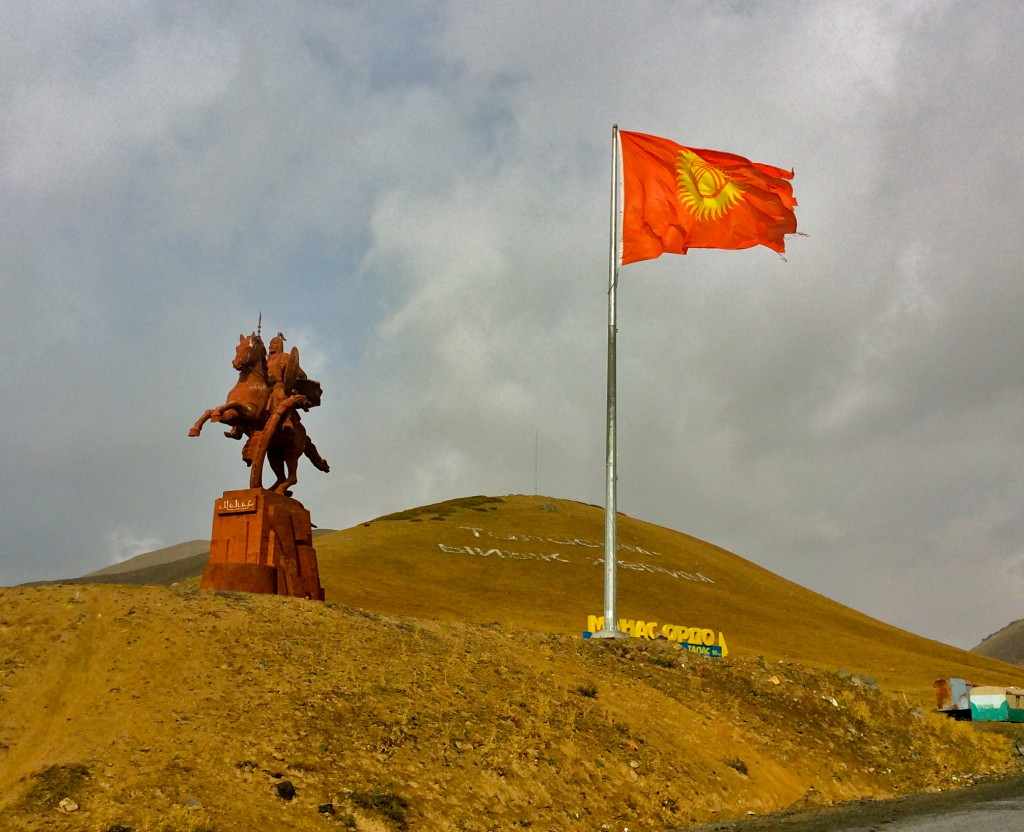 There is a healthy library in a volunteer apartment in Talas City. Did anybody know that the movie Legally Blond was based off of a novel? I read the first 100 pages. I do not recommend anybody else doing the same. I am now dumber.

The male volunteers seem to love throwing rocks into bodies of water. This activity caught onto our taxi drivers who took us out to Besh Tash. Instead of driving back to Talas City while we were off hiking, we are pretty sure those two jegeet drivers just hung out at the meeting spot throwing rocks into the river. For 5 hours.

Tori made me a wonderful Welcome to Talas card for when I arrived. She referred to the Talas-O-Raptors. Maybe that’s actually what the skeleton in the embankment was…

To get a sense of what it is like to swim with the lifestock on the Talas roads, check out this video: Coming home from Jailoo in Talas. 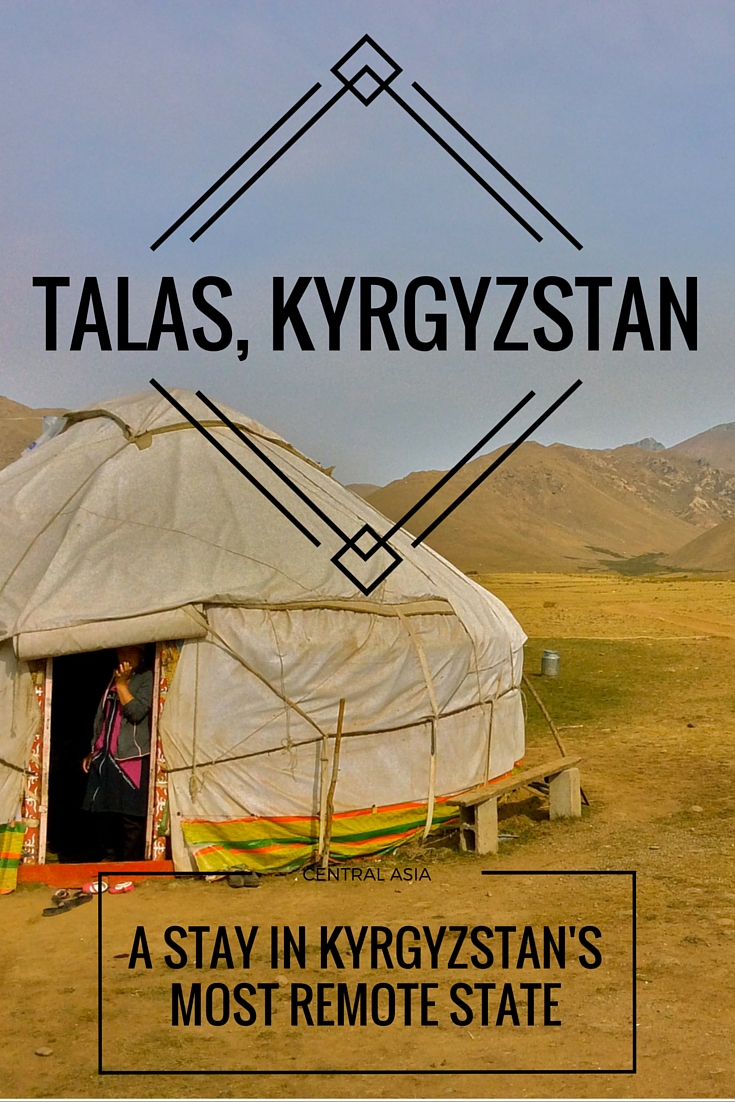 Emily is a Fearless Female who loves the travel life and exploring this beautiful world. A hiking, scuba diving, beach dwelling nomad, Emily's favourite destinations include Myanmar, El Salvador, St. Lucia, Kyrgyzstan, Peru, Nepal, Fiji, and everywhere in between! Find out more about working with Emily and See Her Travel at the Media page!

This site uses Akismet to reduce spam. Learn how your comment data is processed. 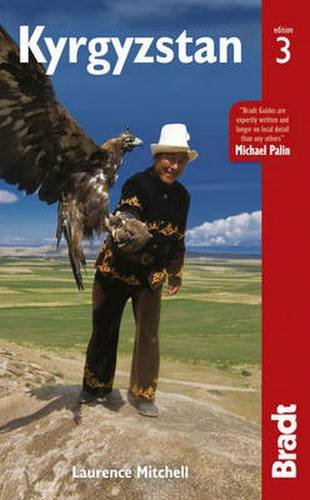